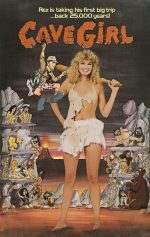 Back in the 80s it seemed that any story line could be but together and put to film, if it had any of the following ingredients, teens, romance, comedy, nerds, nudity, time travel, cannibals and perms, all accompanied with a cracking synthesizer soundtrack; and this movie has them all.

Cave Girl the 1985 comedy romp by onetime only director/writer/producer/cinematographer/aerial cameraman David Oliver, sees our hero of the piece, if you can call him that, Rex (Daniel Roebuck), a put upon school nerd having it tough at school until the school field trip to the local mines.

Rex is the school nerd/dork/geek of the school and is constantly being made the butt of everyone jokes. He’s the sort of kid that would spend all night sitting up making a replica Neanderthal skull, only for it to get destroyed the next day by all the other kids at school. Though saying he’s a kid is a bit of a stretch, Rex looks like he’s in his mid 20s, as do all the other ‘kids’. 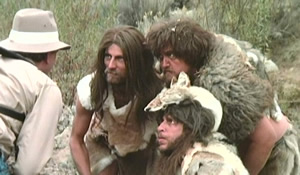 With Rex’s character established, he and his class set off on their field trip to the local mines, to view some cave drawings that have been discovered there. After being separated from the group as he tries to recover stuff from his stolen backpack, Rex comes across a strange glowing crystal that creates a strange sound when touched.

In a completely unrelated matter, a military test is happening nearby, which involves helicopters, missiles and a control room that looks like it has its own WOPR. However, in a strange series of events, involving the crystal, the military testing and Rex; Rex is sent back in time to the Stone Age and finds himself on top of a mountain unconscious.

Once awake, Rex tries to find out where he is and wonders around the unfamiliar landscape until he meets a group of cavemen. This leads to the first of many Benny Hill-esque chase scenes within the movie, which leads to Rex ending up unconscious again. 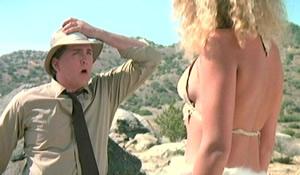 On awaking the second time, Rex is met by Eba (Cynthia Thompson), a beautiful blond haired cave girl with an 80s bubble perm.  On meeting Eba, Rex is smitten and takes it upon himself to bed her in any way possible, usually ending in failure at the hands of the local caveman chief, Argh.

As time passes Rex builds up a friendship of sorts with local cavemen and final wins his Eba, every 80s nerd’s dream. Now that the deed is done and Rex and Eba have found happiness, the local cavemen and Eba are taken away by cannibals to be the main course at a ritual sacrifice, with only Rex to save them. Donning a tarpaulin, an umbrella hat and a skull, Rex manages to scare the cannibals away with the aid of cherry bombs, saving the cavemen and his true love Eba.

As 80s as a film can get, this is a fun if somewhat absurd movie, a guilty pleasure if you will.

According to a magazine interview with Daniel Roebuck, the sequence in the girls’ locker room was filmed after the principal shooting had wrapped. Associate producer Reed Fenton didn’t think that the movie had enough gratuitous female nudity in it, so this sequence was shot to add more to the overall film.