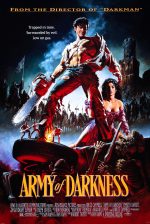 Ash is back and is ready to hand out some boomstick punishment in the third of the Evil Dead trilogy.

Following a harrowing night of demonic possession in Evil Dead II, unassuming store clerk Ash is time-warped into England’s Dark Ages, where he must find the Necronomicon, a compendium of the black arts, before he can return home. Fortunately, he has time to romance a beautiful princess, tune up his chainsaw hand, and battle an army of skeletons led by himself. Hail to the king, baby.

After the traumatic events of his first two encounters with the Book of the Dead (Necronomicon) our Hero, Ash (Bruce Campbell – Bubba Ho-Tep / Man with the Screaming Brain), has been sucked back to the dark Ages of medieval England, along with his Oldsmobile.

Caught in the middle of a battle between the two army’s of Lord Arthur (Marcus Gilbert) and Duke Henry the Red (Richard Grove), Ash is locked up in chains and is taken back to Lord Arthur’s castle along with the captured Duke. 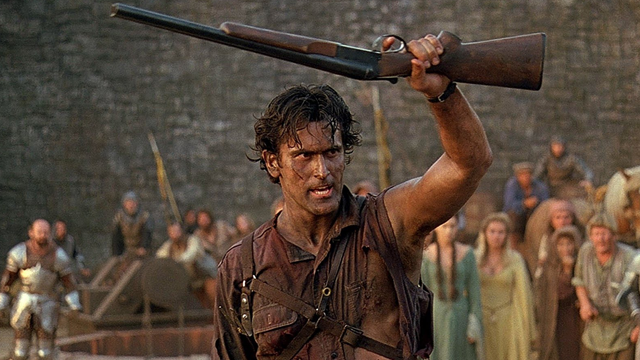 Once at the castle is where we first see Ash in all his glory and Bruce Campbell is Ash! After a brief skirmish with a deadite or two, the one-liners start to flow, and what one-liners they are:

“Alright you primitive screwheads, listen up! You see this? This… is my BOOMSTICK!”

Now with his boomstick in hand, Lord Arthur and his wise men declare that Ash is the chosen one to reclaim the Necronomicon back from the deadites and to help them rid their land of them for good, in exchange for sending him back to his time. Though before setting off, he still has time to woo the princes, Sheila (Embeth Davidtz – Thir13en Ghosts / The Hole), get some ‘sugar’ and build a new replacement hand in the castle workshop.

As Ash leaves for his quest to retrieve the Necronomicon, he is told by a wise man (Ian Abercrombie) that he has to recite an ancient incantation that will allow him to take the book. So on his trusty steed, Ash is off into the badlands of the deadites, with the incantation remembered, sort of, and his boomstick on his back. 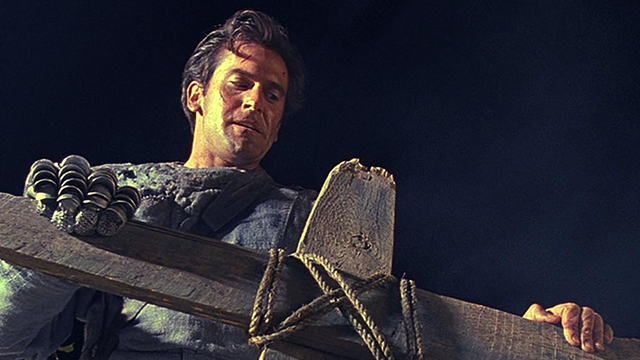 After some trademark Sam Raimi camerawork through the forests, Ash is held up at an old abandon windmill, where the comedy value is cranked up as Ash does battle against a bunch of ‘Mini-Ashes’ and then an evil Ash twin. With comedy taken straight from The Three Stooges, Tex Avery and Raimi’s own dark humor, Bruce Campbell show’s his comedy credentials to the full as he does battle against these strange foes.

With his evil twin vanquished and six feet under, Ash goes on to retrieve the Necronomicon, but when doing so, recites the incantation given to him incorrectly and raises the Army of Darkness. As Ash tries to escape the graveyard that was holding the Necronomicon, a full blown ‘Three Stooges’ scene is created with Ash and a bunch of skeletons to glorious effect. 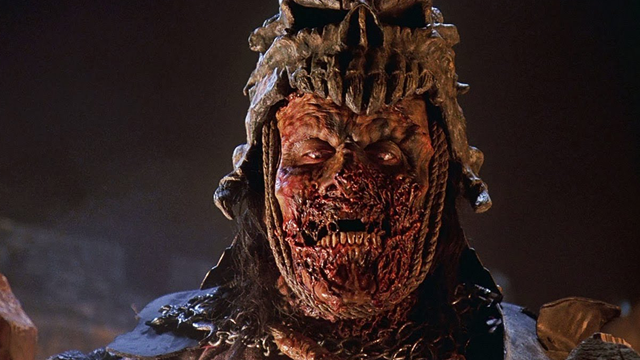 Now back at the castle with the Necronomicon, the wise man tells Ash what he has done by not reciting the incantation correctly and the castle is thrown into panic with the news, and the snatching of Sheila by a flying deadite. Can Ash raise an army to battle against the forces of darkness, will he rescue the princess and will he find a way back to his time?

Many class ‘Army of Darkness’ as a horror [film], but for me it owes more to films Like ‘The Vikings’ and ‘Jason and the Argonauts’ and less to the previous two films in the series. This for me makes the film so much more accessible to new viewers of the series, and with its dark comedy and slapstick even more so. Though some say it’s not a worthy sequel to the other Evil Dead films, I have to disagree for the reasons I have mentioned.

For me, most of the credit for this film has to go to Bruce Campbell as Ash. With a great comedy performance and superb one-liners he has made Ash one of the all-time heroes of cinema. So that’s right. Shop smart. Shop S-Mart. You got that? Get some boomstick in your life.